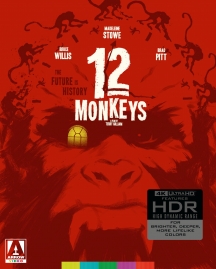 THE FUTURE IS HISTORY Following the commercial and critical success of The Fisher King, Terry Gilliam next feature would turn to science fiction and a screenplay by Janet and David Peoples (Blade Runner, Unforgiven) inspired by Chris Marker's classic short film La Jetée. In 1996, a deadly virus is unleashed by a group calling themselves the Army of the Twelve Monkeys, destroying much of the world's population and forcing survivors underground. In 2035, prisoner James Cole (Bruce Willis, Die Hard) is chosen to go back in time and help scientists in their search for a cure. Featuring an Oscar-nominated turn by Brad Pitt (Fight Club) as mental patient Jeffrey Goines, Twelve Monkeys would become Gilliam's most successful film and is now widely regarded as a sci-fi classic. Arrow Films are proud to present the film in a stunning new restoration.

Arrow Video's new [12 Monkeys] looks and sounds great. If you're a Twelve Monkeys fan, this is the best incarnation of the movie out there

Arrow Video's presentation of the film comes sourced from a brand new 4K transfer from the original 35mm camera negative, with color grading supervised and approved by Terry Gilliam. It's absolutely gorgeous

12 Monkeys Is the Apocalypse Movie We Need Right Now

12 Monkeys now seems not only visionary but prophetic; the dates and specifics of its pandemic may not match up with ours, but the emotions and psychology do.

The best version of the film on the market.

This home video iteration of 12 Monkeys is as beautiful and accurate presentation of this 35mm lensed film that has been produced.

This 4K release grants the film a noticeable step-up in quality in what was an already beautiful Blu-ray release from Arrow.

Terry Gilliam...delivered the biggest box office hit of his career with a story about a time-traveling man who hopes to find the key to humanity’s survival. Highly recommended

...at once haunting, humorous, nerve-wracking, and ambitious—one of Gilliam’s best.

Terry Gilliam’s prescient and visionary 12 Monkeys, which boasts what may be Bruce Willis’s finest performance, gets a sterling UHD upgrade from Arrow Video.

12 Monkeys is Terry Gilliam’s most successful film, financially. I think it might also be his best artistic achievement.

...widely regarded as a sci-fi classic...it stands as an engrossing piece of science fiction from one of the most distinct filmmakers of our time. This is a terrific release for longtime fans and newcomers alike.

If you’re into dystopian, post apocalyptic sci-fi movies, and appreciate the irony that this movie now has in a post pandemic world, then you should definitely pick this one up.

...a banger, filled with Gilliam’s distinctive imagery, one of the first and best cuckoo-bananas Brad Pitt performances, and some of the best acting of Bruce Willis’ career. (