My Stepmother Is An Alien

She's gorgeous, and she's never been kissed. Needless to say, she's from another planet. 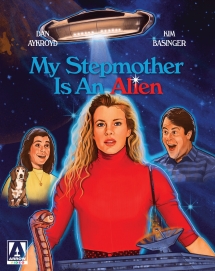 He married a girl from out of town... Way out of town. Dan Aykroyd (Ghostbusters), Kim Basinger (The Nice Guys) and Jon Lovitz (Southland Tales) star in a fish-out-of-water comedy with a sci-fi twist that questions whether a romance between two star-crossed lovers who are literally worlds apart can ever work. When widowed astronomer Steve Mills (Aykroyd) inadvertently causes a gravitational disruption in deep space, a race of hyper-advanced alien lifeforms sends one of their own to investigate, disguised in the alluring human form of Celeste (Basinger). Tasked with seducing the lovelorn Steve in a bid to gain access to his scientific research, Celeste finds herself falling for the man she's been sent to swindle. But they've not counted on Steve's young daughter Jessie (Alyson Hannigan, TV's Buffy the Vampire Slayer), who's none too thrilled by the prospect of a new mother - especially not one from another planet. Funny and touching in equal measure, My Stepmother is an Alien is an offbeat and at times surprisingly risqué comedy that confirms the adage that what unites us is far greater than what divides us... even if what divides us happens to be an entire galaxy.

Basinger proves here, as she did in 'Blind Date,' that she has a natural gift for slapstick... Aykroyd falls in love with her - not because she looks sexy, but because she makes him laugh. I had much the same reaction.

Akroyd and Basinger give the film an infectious stroke of energy, and by the end we continue to smile...

Funny and touching in equal measure, My Stepmother is an Alien is an offbeat and at times surprisingly risqué comedy that confirms the adage that what unites us is far greater than what divides us ... even if what divides us happens to be an entire galaxy.

This is a definite upgrade

—My Stepmother Is An Alien [Blu-ray], Mr Tony Of The Dead

a bizarre treat from the ’80s. It does a fine job of mixing ’80s humor with the kind of plot that you’d see in a ’50 science fiction show

—My Stepmother Is An Alien [Blu-ray], Inside Pulse

Maybe I was in the right mood, but when Basinger is giggling and imitating Jimmy Durante? That’s some prime romantic comedy material and it made my heart sing

—My Stepmother Is An Alien [Blu-ray], Bands About Movies

—My Stepmother Is An Alien [Blu-ray], Shawn C Phillips

—My Stepmother Is An Alien [Blu-ray], Doblu

—My Stepmother Is An Alien [Blu-ray], Cereal At Midnight

My Stepmother is an Alien gets a first-rate release from Arrow Video that comes with a solid audio/video presentation and a pair of informative extras. Recommended.

—My Stepmother Is An Alien [Blu-ray], 10K Bullets

A stellar job was done here with the new presentation.

—My Stepmother Is An Alien [Blu-ray], The Film Junkies

A fun sci-fi film…check it out

—My Stepmother Is An Alien [Blu-ray], Screaming Toilet

1988's My Stepmother is an Alien is a very strange movie that could only have been made in the 1980s. Part lusty sex comedy, part sincere family tale. Kim Basinger is hilarious. Fans of this video store staple will find much to love about the new Blu-ray release from Arrow Video, which provides an appropriately-attractive package that's hard to resist.

Arrow Video is known for giving cult films deluxe Blu-ray releases. It's time for My Stepmother is an Alien to shine.

The cast is quite impressive with Dan Aykroyd, Kim Basinger, Jon Lovitz, and Alyson Hannigan (in her debut role) in starring roles. Look for bit parts by Seth Green and Juliette Lewis too. Basinger fares well here as she’s undoubtedly charming and sexy as the titular alien. It’s not hard to see why her career skyrocketed after this.

With the restoration treatment from Arrow Video, fans can revisit a film that is best enjoyed without an ounce of critical thinking with a clean picture and restored original sound, plus a small grouping of bonus materials to enhance the experience.

This is a perfect example of a movie that could never be made in today’s world… it’s super campy and cheesy and is a nice throwback watch.

The film is slick, and the numerous special effects shots from legendary FX guru John Dykstra hold up even by today's standards

I enjoyed this as much as when I originally way back when I was a wee un-popped kernel. A fun film to watch for a bit of 1980s nostalgia with a few nice extras.

This is an all-new 2K restoration from the original camera negative, and this one definitely looks very solid from start-to-finish.

[The film] is slick, and the numerous special effects shots from legendary FX guru John Dykstra hold up even by today's standards

I watched this movie a LOT as a kid and nothing has led me to question more my parent's child-raising skills. I really enjoyed Kim Bassinger in this

—Aaron Woodul, One Of Us

Phantom of the Mall has a knowing wink about it that adds some lightness to balance out its slate of brutal kills - just the right amount of self-awareness to make this stand out from the countless slashers of the period.

Funny and touching in equal measure, My Stepmother is an Alien is an offbeat and at times surprisingly risqué comedy that confrms the adage that what unites us is far greater than what divides us ... even if what divides us happens to be an entire galaxy

My Stepmother is an Alien is covered in mounds of ’80s cheese. Glorious, tasty cheese. The jokes are corny, the situations overdone, there’s a weird fetishism of Jimmy Durante… but the cast is fantastic, and the film has gobs of heart

The perhaps surprising standout in the comedy department, given that she is surrounded by Saturday Night Live alums, is Basinger, who not only delivers most of the picture’s best laughs, but manages to play a fish-out-of-water character who seems as frustrated by her own inexperience as anyone in the audience might ever be, while also investing her alien with a warmth and heart that helps sell the film’s schmaltzier beats.