When Uncle Sam rises from the dead to punish the unpatriotic, only his young nephew and a bitter Korean War veteran can stop his red-blooded rampage. 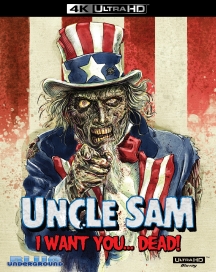 The Star-Spangled Shocker From The Creators Of MANIAC COP

It's Fourth Of July Weekend, and the recently discovered corpse of Sgt. Sam Harper - killed by 'friendly fire' during the first Gulf War - is returned to his all-American hometown. But when Sam rises from the dead to punish the unpatriotic, only his young nephew and a bitter Korean War veteran (Soul icon Isaac Hayes of SHAFT and SOUTH PARK fame) can stop his red-blooded rampage. Draft dodgers, tax cheats, crooked politicians and flag-burners beware: Uncle Sam wants you... DEAD!

A Unique Ride For Horror Fans!

An Entertaining Film... Lustig keeps the action moving, with convincing special effects and stuntwork and a fun supporting cast of character actors!

UNCLE SAM is the best kind of B-movie, one that reinvigorates stale horror clichés via both tongue-in-cheek social commentary and an unironic, unbridled love for blood-and-guts mayhem!

Excellent filmmakers, great cast, always a mystery why this horror classic didn't get a theatrical break.   One of those great mysteries of life.

This is really a fantastic release...the definitive edition. Uncle Sam is an insanely fun trip down memory lane.

Uncle Sam is definitely an unrated gem that deserves to be given a reassessment, especially for fans of Lustig and Cohen. The UHD disc's transfer is flawless. High Recommendations!!!

—A. W. Kautzer, The Movie Isle

...a cult classic...Blue Underground has managed to make another breathtaking 4K transfer on this film.

Ultimately, Uncle Sam is a highly entertaining film that fans of William Lustig and Larry Cohen should thoroughly enjoy.

If you like slasher movies that are based around holidays I think you will get just as much of a kick out of Uncle Sam as I did. It could be the very best 4th of July-themed horror movie that has ever been made.

The real star of the show in this release is the stellar 4K presentation, and should be your main reason for picking up this release...

Uncle Sam is an over-the-top, tongue-in-cheek satire about American's obsession with military dominance and the great lengths the nation will go in order to appeal to the country's youth.

...the UHD is excellent and belongs on every genre fan's shelf.