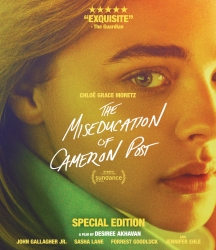 Based on the celebrated novel by Emily M. Danforth, THE MISEDUCATION OF CAMERON POST follows the titular character (Chloë Grace Moretz) as she is sent to a gay conversion therapy center after getting caught with another girl in the back seat of a car on prom night. Run by the strict and severe Dr. Lydia Marsh (Jennifer Ehle) and her brother, Reverend Rick (John Gallagher Jr.) -- himself an example of how those in the program can be "cured" -- the center is built upon repenting for "same sex attraction." In the face of intolerance and denial, Cameron meets a group of fellow "sinners," including the amputee stoner Jane (Sasha Lane) and her friend, the Lakota Two-Spirit Adam (Forrest Goodluck). Together, this group of teenagers forms an unlikely family as they fight to survive. Winner, Sundance Film Festival Grand Jury Prize. Blu-ray includes: 5.1 Surround, Stereo, English subtitles for the deaf and hearing-impaired

[Post] is anchored by a strong performance by Chloe Grace Moretz.

Told through the perspective of a hormonal girl in a community that disapproves of her desires, it's like explosives in the head and heart.

The Miseducation of Cameron Post is a modest-size film that performs a service opposite to that of Conversion therapy: It respects the vulnerability that accompanies the emergence of any young person's sexuality.