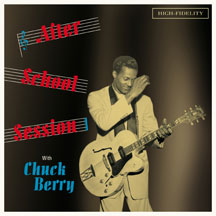 This quintessential reissue includes Chuck Berry's magnificent debut album, After School Session, originally released in May 1957 by Chess Records. It's one of the all-time cornerstones of rock & roll, and a truly representative sampler of Berry in his prime. After School Session was only the second long-playing album from Chess Records. The title of Berry's LP was intended to attract his teen audience in the most innocent of terms (in connection with the rock & roll cuts), but also subtly invoked more daring "extra-curricular" activity in its blues and ballads, and older, post-teen concerns. While it was the teen-oriented hit singles that paid the bills and made Chuck Berry a truckload of cash back in the day, it was lesser heard tracks (like "Drifting Heart," "Together We Will Always Be," and "Havana Moon") that displayed the artist's adventurous side, his blues music roots, and his willingness to push hard against musical boundaries. In addition to the original masterpiece, this collector's edition also contains 4 bonus tracks from the same period, including great numbers such as "Rock & Roll Music," "Thirty Days (To Come Back Home)," the unforgettable "Sweet Little Sixteen," and the outstanding single "Maybellene" which climbed to #1 on the US R&B charts in 1955. All of these original gems -which have been brilliantly remastered to achieve the most pristine sound- are simple two-and-a-half-minute songs that convey all the sheer power and emotion of rock & roll. Without these recordings, there would be no Beatles, Rolling Stones or Kinks, at least in the forms they eventually took.