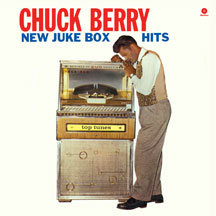 Chuck Berry (guitar, vocals), Matt Murphy (guitar), L.C. Davis (tenor saxophone), Johnny Johnson (piano), Willie Dixon (bass), Eddie Hardy (drums).Includes original release liner notes and reissue liner notes by Andy McKaie. Originally released on Chess (LP 1456) in March of 1961.Digitally remastered from original Chess masters.Most rock & roll albums recorded in the '50s were notorious for being nothing more than a few hit singles patched together with hastily recorded versions of pop standards. Though Chuck Berry recorded his fair share of run-of-the-mill pop standards, he was one of the few rock artists who managed to make consistently good albums during his '50s heyday. Like most albums of the day, NEW JUKE BOX HITS was based around two hit singles, "Sweet Little Sixteen" and I'm Talking About You."The rest of this album is made up of obscure (though wonderful) Berry-written tracks like the funky bossa nova of "Thirteen Question Method" and rampaging versions of such songs as Little Richard's "Rip It Up" and the venerable "Route 66." Unlike many of his contemporaries, however, Berry's energetic performances and wild, inimitable electric guitar style make every song he sang sound like his own composition. And even though his spirited cover versions were not in the same league as the sublime rock & roll Americana of Berry hits like "Sweet Little Sixteen," they rock, as does NEW JUKE BOX HITS.