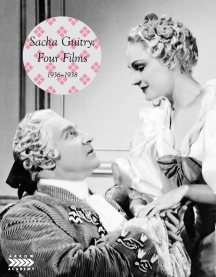 Four Films 1936-1938 brings together a quartet of 1930s features by Sacha Guitry, the celebrated French filmmaker, playwright and actor of the stage and screen, each based on his earlier works. Indiscretions (Le Nouveau testament) follows a holier-than-though physician who is scuppered by his own hypocrisy. My Father Was Right (Mon pÃ¨re avait raison) tells off a man who, after being left by his wife for another man, raises his son to be wary of women. Let's Dream (Faisons un rÃªve...) is another story of mistrust, between husband, wife and lovers. And the history of one of France's most famous streets is retold in Up the Champs-Ã‰lysÃ©es (Remontons les Champs-Ã‰lysÃ©es), featuring multiple performances from Guitry himself. Available for the first time on Blu-ray this set presents some of Guitry's earliest and most enjoyable works.