THEY''RE SISTERS. BUT IT WILL TAKE A MIRACLE TO MAKE THEM A FAMILY. 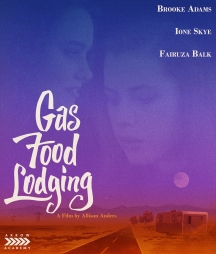 THEY'RE SISTERS. BUT IT WILL TAKE A MIRACLE TO MAKE THEM A FAMILY. Adapted from the novel Don't Look and It Won't Hurt by Richard Peck, Allison Anders (Grace of My Heart) whipped up a storm at the 42nd Berlin International Film Festival with her masterfully crafted tale of a young woman trying to find love while struggling to bring up her two daughters. Abandoned by her husband, Nora (Brooke Adams, Invasion of the Body Snatchers, The Stuff) waitresses to keep her head above water while raising two teenagers in a small New Mexico town trailer park. Beautiful and rebellious, Trudi (Ione Skye, Wayne's World, Zodiac) quits school to work alongside her mother, while her sister Shade (Fairuza Balk, The Craft, American History X) whittles away her time watching old movie matinees. Their life is turned on its head when Trudi finds that she has fallen pregnant after a string of promiscuous relationships and the girls' absent father returns with hopes of mending the relationships he broke when he left. A wonderfully engaging story of the woes of teenagers reaching adulthood, Gas Food Lodging is a distinctly American portrayal of a mother trying to raise two wayward teens with growing pains, who are learning about love, life and each other. This director-approved restoration finally affords this 90s modern classic the home video treatment it rightly deserves.

Gas Food Lodging was a critical darling out of the 1992 Sundance Film Festival, helping to usher in an American independent film movement that had begun to germinate in the late 1980s and would flourish in earnest over the following half-decade. The film is a touching portrait of a family finding each their own way through moments of seemingly insurmountable desperation.