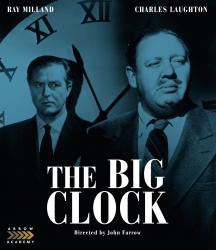 Adapted by acclaimed screenwriter Jonathan Latimer from a novel by the equally renowned crime author Kenneth Fearing, The Big Clock is a superior suspense film which classily combines screwball comedy with heady thrills. Overworked true crime magazine editor George Stroud (Ray Milland, The Lost Weekend, The Pyjama Girl Case) has been planning a vacation for months. However, when his boss, the tyrannical media tycoon Earl Janoth (Charles Laughton, Witness for the Prosecution), insists he skips his hols, Stroud resigns in disgust before embarking on an impromptu drunken night out with his boss's mistress, Pauline York (Rita Johnson, The Major and the Minor). When Janoth kills Pauline in a fit of rage, Stroud finds himself to have been the wrong man, in the wrong place, at the wrong time: his staff have been tasked with finding a suspect with an all too familiar description... Stroud's very own! Directed with panache by John Farrow (Around the World in 80 Days), who stylishly renders the film's towering central set, the Janoth Building, The Big Clock benefits from exuberant performances by Ray Milland and Charles Laughton, who make hay with the script's snappy dialogue. A huge success on its release, it is no wonder this fast-moving noir was remade years later as the Kevin Costner vehicle No Way Out.

Expertly crafted and rather energetically performed, The Big Clock manages to generate both excitement and some actually goofy laughs. As usual with Arrow releases, the supplements are aces. Recommended.

An edge-of-your-seat thriller that also happens to be laugh-out-loud funny throughout... The Big Clock is truly an unusual gem. The film alone was enough of a surprise to merit our recommendation, and the insightful extras only bolster the value of this release.

The central premise is deliciously ingenious and the ensemble is a who's-who of first-rate character actors.

With this script, these actors and this director, here's a film in which everyone was whirring at the top of their game.