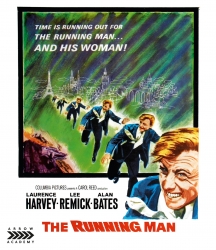 Over a decade after re-defining the thriller with The Third Man, director Carol Reed returned to the genre with The Running Man. Reuniting with that film's cinematographer Robert Krasker (BAFTA-nominated for his work here), Reed goes in the opposite direction visually, framing the twisty plot in sun-kissed widescreen color. Rex Black (Laurence Harvey, Walk On The Wild Side) has successfully faked his death in a plane crash and escaped to sunny Málaga under a new identity, waiting for his wife Stella (Lee Remick, Anatomy Of A Murder) to arrive with £50,000 of life insurance money. It's the start of a blissful, trouble-free new life for the couple - until Stephen (Alan Bates, Gosford Park), the insurance agent in charge of investigating Rex's death, suddenly arrives in town. Is he just holidaying in Spain, as he claims, or is he on assignment to foil Rex's scheme? Adapted by John Mortimer (later the creator of Rumpole of the Bailey) from the novel The Ballad of the Running Man by Shelley Smith, this underappreciated entry in Reed's celebrated oeuvre makes its official worldwide home video premiere, complete with insightful new bonus features.

A completely professional and often quite ravishing looking film, one which should appeal to fans of its star trio.