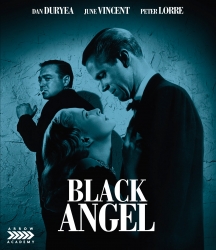 Elegantly directed by Hollywood veteran Roy William Neill (best known for his 11 Sherlock Holmes films starring Basil Rathbone), Black Angel is an underappreciated film noir treasure, adapted from a novel by the acclaimed crime writer Cornell Woolrich (Phantom Lady). When the beautiful singer Mavis Marlowe (Constance Dowling) is slain in her chic apartment, the men in her life become suspects. There is Martin Blair (Dan Duryea, Scarlet Street), her alcoholic musician ex-husband, nursing a broken heart; there is the shady nightclub owner Marko (Peter Lorre, Casablanca, The Maltese Falcon) who has been sneaking around her place, and there is Kirk Bennett (John Phillips), the adulterer who found his mistress's dead body and fled the scene. When Bennett is convicted and sentenced to death, his long-suffering wife Catherine (June Vincent) joins forces with the heartbroken pianist Martin Blair to uncover the truth... Black Angel is a consummate 1940s crime thriller which boats a suspenseful narrative, strong performances and atmospheric, meticulously lit cinematography. Roy William Neill's film is presented here in a sumptuous restoration, with several illuminating new extras.

A rather interesting film noir which has a few visual flourishes and a kind of nice and twisty plot. Black Angel manages to turn a number of noir tropes pretty much squarely on their heads... Recommended.

I had seen the picture a couple times before but never looking as great as it does on this new Arrow Blu-ray.