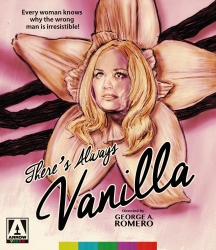 Available for the first time on Blu-ray, Night of the Living Dead director George A. Romero's second feature film, There's Always Vanilla - a biting satire of early '70s American society and an unjustly overlooked entry in the late director's filmography. When young drifter Chris meets beautiful model Lynn by a chance occurrence, the pair hit it off and a romantic relationship ensues. But with their wildly contrasting outlooks on life, it soon becomes clear that the coupling is doomed from the outset. Starring Judith Streiner (born Judith Ridley) from Night of the Living Dead and Ray Laine, who would go on to appear in Romero's next film, Season of the Witch, There's Always Vanilla is a unique entry in the director's canon and one that's ripe for reappraisal.