A Pistol For Ringo & The Return Of Ringo: Two Films By Duccio Tessari 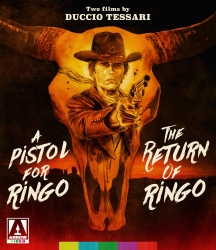 The original Ringo films introduced another iconic hero to the spaghetti western; a clean-cut sharp shooter who was markedly different to Clint Eastwood's Man With No Name. In A Pistol For Ringo, the eponymous hero, played by Giuliano Gemma (Day of Anger, Tenebrae), infiltrates a ranch of Mexican bandits to save a beautiful hostage (Nieves Navarro, Death Walks in High Heels). In The Return Of Ringo, the gunslinger, now a veteran of war, disguises himself as a Mexican in order to take revenge on outlaws who have stolen his property and taken his wife. Hugely successful upon their original release, thanks in part to the skilled direction of Duccio Tessari (The Bloodstained Butterfly, Death Occurred Last Night), the Ringo films proved influential on the Italian western, spawning numerous unofficial sequels, due to their gripping set-pieces and unforgettable musical scoring by Ennio Morricone. Arrow Video is proud to present both films in sumptuous new restorations that truly brings their stylish cinematography to life.

Arrow continues to offer fans of cult genre items a field day with releases that tend to sport nice technical merits and enjoyable supplements. They've done it again with these two Ringo films, releases which got overlooked domestically at the time of their original theatrical exhibitions but which are now ripe for rediscovery. Recommended.

A lovely set from Arrow Video... If you like Spaghetti westerns beyond the usual fare, these are two well worth checking out.