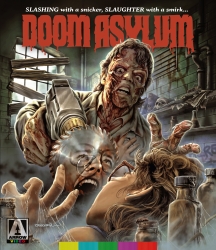 If you thought Sex and the City 2 was a stomach-churner, you ain't seen nothing yet! Long before playing one of Carrie Bradshaw's best gal pals, actress Kristen Davis found herself up against an altogether different kind of horror in 1987's Doom Asylum: a riotous mix of gore, gags and goth girl groups galore! When a group of horny teens wind up on the grounds of a creepy abandoned asylum, they think they've found the perfect place to party. Little do they know that inside the building's crumbling walls lurks a freakishly deformed maniac, driven to madness by the tragic loss of his fiancée in a car accident. With an array of grisly surgical tools at his disposal, it's only a matter of time before the youngsters begin meeting various splattery ends at the hands of the ghoulish Coroner. Helmed by director Richard Friedman (Scared Stiff and Phantom of the Mall: Eric's Revenge), and also starring Penthouse Pet of the Year 1988 Patty Mullen (Frankenhooker), Doom Asylum combines outlandish gore and a wise-cracking villain to create one of the most wildly entertainingly blood-spattered slashers of the late '80s.

Arrow's Blu-ray release looks fantastic and is loaded with extras that do a great job of documenting both the film's history and its appeal. Recommended.

The film's blacker than black humor is also relentlessly cartoonish, an aspect that is provocatively intriguing. Arrow has once again provided a release with solid technical merits and a nice array of bonus features.