The Wizard Of Gore 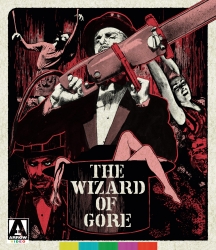 From the crazed madman of the macabre, late splatter movie pioneer Herschell Gordon Lewis (Blood Feast, Two Thousand Maniacs!), comes his most fiendish feat of terrifying onscreen trickery yet - behold, The Wizard of Gore! You've all seen the trick in which the magician saws his glamorous assistant in half - but what about the spike through the brain gag? Or the good old smashing punch-press? Montag the Magnificent's blood-curdling onstage performances shock and dazzle his audiences in equal measure. But when his participants start winding up dead, local TV talk show hostess Sherry Carson suspects his gruesome "act" may be more sinister than it first seems... Featuring some of the most notorious gory setpieces in all of director H.G. Lewis' blood-soaked career, The Wizard of Gore is a stomach-churning, Grand Guignol production that's less sleight of hand and more slice of hand!!!