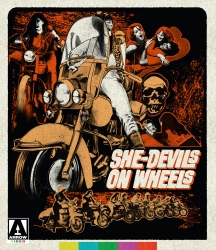 Wild! Vicious! With motorcycles as their lovers! Experience sights and sounds beyond your very imagining as "Godfather of Gore" Herschell Gordon Lewis (Blood Feast, Two Thousand Maniacs!) tackles the biker chick sub-sub-genre with She-Devils on Wheels! Have you ever heard the saying "it's a man's world"? Well don't dare repeat that to The Man-Eaters - a raucous, rowdy and randy gang of female bikers who ride their men just as viciously as they do their motorcycles. When they're not racing each other to get first pick of the "stud line-up", these female hellcats are busy terrorizing the town and clashing with the rival male gangs. Billed as "by far the most exciting picture of its type ever filmed", She-Devils on Wheels sees splatter pioneer H.G. Lewis going full throttle with the most shocking biker flick of its kind - now accompanied by his other vicious gang opus Just for the Hell of It for a thrilling, pulse-racing double-bill!

Arrow Video's treatment of Herschell Gordon Lewis' body of work is to be commended... This is another great disc.