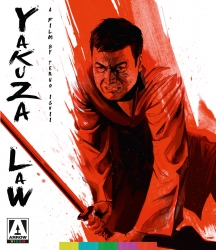 Director Teruo Ishii (Blind Woman's Curse, Horrors of Malformed Men), the Godfather of J-sploitation, presents Yakuza Law (AKA Yakuza's Law: Lynching) - a gruelling anthology of torture, spawning three district periods of Japanese history and bringing to the screen some of the most brutal methods of torment ever devised. In this deep dive into the world of the Yakuza, meet the violent men who rule the Japanese underworld and the cruel punishments inflicted on those who transgress them. The carnage begins in the Edo Period with a violent tale of samurai vengeance starring Bunta Sugawara (Battles Without Honor and Humanity), before shifting to the Meiji Period as the exiled Ogata (Minoru Oki, Shogun Assassin) returns to face punishment for his past transgressions... and, ultimately, to take his revenge. Finally, the action is brought right up to date with a tale of gang warfare set in then-present-day 60s Japan and headlined by Teruo Yoshida (Ishii's Orgies of Edo), as a powerful crime syndicate seeks bloody vengeance for the theft of one hundred thousand yen. Brutal, bewildering and definitely not for the faint-hearted, Yakuza Law represents Japanese popular cinema at its most extreme... and most thrilling.

This is one of the nicer looking releases of a vintage Toei film. As usual, Arrow has provided some nice supplements.

A very rewarding watch made all the better by the presence of the eternally cool Bunta Sugawara. Arrow's Blu-ray looks and sounds quite nice and features some good supplements too. Recommended.