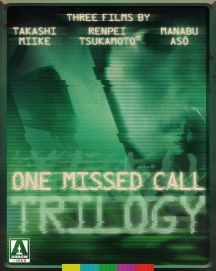 An iconic trilogy of J-horror films comes to Blu-ray for the first time! Tapping into the same brand of terror as the Ring and Grudge movies, visionary director Takashi Miike (Audition, Blade of the Immortal) presents a modern, high-tech twist on that mainstay of Japanese folklore, the yurei or vengeful spirit, in the form of its own iconic antihero - the terrifying Mimiko. In the first installment in the trilogy, 2003's One Missed Call, student Yoko (Anna Nagata, Battle Royale) receives a phone message from her future self, ending with her own death scream. Two days later, she dies in a horrific rail collision. As the mysterious phone curse spreads, claiming more young lives, Yoko's friend Yumi (Ko Shibasaki, Battle Royale, 47 Ronin) joins forces with detective Hiroshi (Shinichi Tsutsumi, Space Battleship Yamato), whose sister met the same gruesome fate. But can they unravel the mystery before the clock runs out on the next victim - Yumi herself? Mimiko's curse continues to wreak bloody havoc in two sequels - 2005's One Missed Call 2 and 2006's One Missed Call: Final, in addition to spawning a TV series and an American remake. This lavish collection from Arrow Video gathers together the original trilogy and a swathe of in-depth bonus features for the ultimate spine-tingling experience.

Miike fans will probably want to catch One Missed Call if they haven't already, and it's probably inarguably the strongest effort in this set. All three films have their spooky moments, though, even if the overarching premise seems awfully familiar. This is another Arrow release where a really excellent supplemental package may be the ultimate calling card. Recommended.

Left out of the conversation when discussing J-Horror and overshadowed by the abject terribleness of its American remake, ONE MISSED CALL is an accomplished, overlooked chiller by one of modern Japanese Cinema's greats.

A solid horror thriller with some gruesome beats that still makes time for a commentary on media and cultural obsession. Arrow's release is fantastic... It collects not just the three films but also a ton of extra content.

What makes this picture stand above many of its contemporaries is the steady hand of visionary director Takashi Miike (Audition, Ichi the Killer). Despite this being his most conventional work as a filmmaker, Miike breathes new life into old material proving there are more scares to be had if you know where to look.

If you love J-horror (or just a good ol' yarn about a curse), One Missed Call and it's follow-ups will surely satisfy; providing plenty of supernatural spills n' chills while providing some dark humor and deep emotion these come recommended by yours cruelly!