Edge Of The Axe 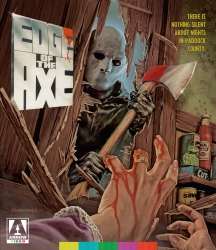 From cult Spanish filmmaker José Ramón Larraz (Vampyres, Symptoms) comes this long-neglected late 80s slasher classic, finally unleashed on Blu-ray for the first time ever! The rural community of Paddock County is being rocked by the crazed exploits of an axe-wielding psychopath, who stalks the night in a black trenchcoat and mask. As the victims pile up, the authorities attempt to keep a lid on the situation, whilst computer whizz-kid Gerald and girlfriend Lillian seek to unmask the killer before the town population reaches zero. Nominally set in Northern California but shot primarily in Madrid, giving the film an off-kilter, American/European atmosphere akin to the likes of Pieces, Edge of the Axe is a late entry hack-and-slash masterpiece from one of the titans of Spanish terror.

Arrow Video brings Larraz's film to Blu-ray in a kickass 2k restoration, making it a must-see for '80s horror junkies and anyone whose interest is piqued by the notion of culturally hybridized hack 'n' slash.

Tried and true horror fans seeking out the undiscovered are bound to find plenty to appreciate with Edge of the Axe. Arrow Video's treatment gives the film a new life with an excellent transfer and entertaining extras, all of which make for a very nice package.