Why Don't You Just Die! 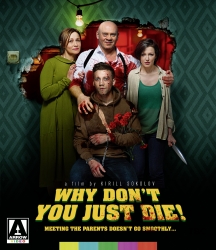 Shades of early Tarantino, Edgar Wright and Sam Raimi abound in this violent, stylish and riotously entertaining slice of family life, Moscow style, described as "a splatterpunk action comedy drenched in gleefully dark Russian humor" (The Hollywood Reporter) and "an amazing first feature from a filmmaker to watch" (Screen Anarchy). Matvey (Aleksandr Kuznetsov) has just one objective: to gain entry to his girlfriend's parents' apartment and kill her father Andrey (Vitaliy Khaev) with a hammer to restore her honor. But all is not as it initially seems, and Matvey's attempts to bludgeon the family patriarch to death don't quite go to plan as Andrey proves a more formidable - not to mention ruthless - opponent than he anticipated... and Matvey, for his part, proves stubbornly unwilling to die. Making his feature debut, writer/director Kirill Sokolov presents a rousing tale of family, modern relationships and the dark places they can take you to when things turn sour. Featuring a soundtrack that veers between Ennio Morricone-esque western riffs and toe-tappingly catchy pop numbers, Why Don't You Just Die! delivers laughs, shocking twists and copious quantities of blood and gore, and establishes Sokolov as one of cinema's brightest rising stars.

There's a youthful, raw kinetic energy in full breakout mode and it will serve Sokolov well to carry that through his burgeoning career. Why Don't You Just Die is an undeniable crowd pleaser.

I'm not sure if Sokolov meant this to be some kind of critique of Russian culture, but he ended up making a film that should universally appeal to those with blacker than black senses of humor. Technical merits are first rate, and the supplemental package very appealing. Highly recommended.

Entertaining Russian import Why Don't You Just Die! offers stylized violence and action, and plenty of dark comedy. Fans of Quentin Tarantino, Guy Ritchie and other genre filmmakers will enjoy this movie, which is gifted a nice U.S. release from Arrow Video. Highly Recommended.