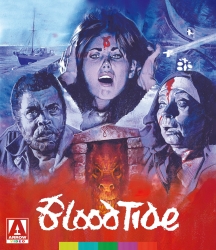 Terror strikes in paradise as Academy Award-winning actors James Earl Jones, José Ferrer and Lila Kedrova star in this thrilling tale of sea monsters and sacrificial virgins, from the people that brought you the notoriously gruesome Island of Death! When treasure hunter Frye (James Earl Jones) accidentally awakens an ancient sea monster that has been lying dormant on a Greek island, the inhabitants are forced to resume the practice of sacrificing virgins in order to placate the demonic creature. Meanwhile a couple, Neil and Sherry, arrive on the island in search of Neil's missing sister, Madeline. Written and produced by Nico Mastorakis - the man behind such genre favourites as the aforementioned Island of Death, The Zero Boys, The Wind and many others - and directed by Richard Jefferies (Scarecrows, Tron: Legacy), Blood Tide is a suspense-filled creature feature surging with blood, nudity and beachside aerobics!