We all want what we don't have 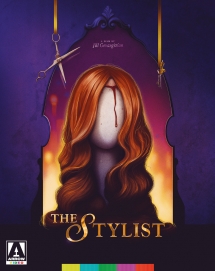 Obsession gets a makeover in The Stylist, a deliciously twisted slice of female-led psychological horror, nominated for the New Visions Award for Best Motion Picture at the 2020 Sitges International Film Festival and based on co-writer/director Jill Gevargizian's award-winning short film of the same name. We all dream of being someone else... but for Claire (Najarra Townsend, Contracted), that dream goes from an obsession to a living nightmare. Hairstylist by day, serial killer and collector of scalps by night, Claire's lonely existence is thrown into turmoil when her regular client, Olivia (Brea Grant, After Midnight, Lucky), asks her to style her hair for her wedding day. Increasingly fixated on Olivia's seemingly flawless life, Claire vows to lock up her scalp collection and change her ways for good - only to discover that repressing your deadly desires is easier said than done... Featuring striking visuals and pitch-perfect performances from its talented cast, The Stylist offers viewers "a delicately deranged glimpse into social anxiety and loneliness" (Slashfilm) - a bold and mesmerizing debut feature from a filmmaker to watch.

A delicate, deranged glimpse into social anxiety and lonliness

Killer performances, sticky scalpings and costumes to die for

A real win for indie horror

The Stylist, while excellent in its own right, signals what could be the beginning of a career for a fledgling filmmaker with a keen visual sense and a talented crew to back her up. Arrow Video's release is highly commendable with a lush presentation and a surprisingly excellent extras selection. Fans of minimalist horror will definitely want to check this one out. Highly recommended.