The Initiation Of Sarah 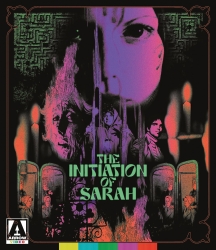 WELCOME TO HELL WEEK! Satantic secrets and telekenetic terror combine in this classic made-for-TV horror movie directed by Hammer Films alumnus Robert Day (She), from a story co-written by Tom Holland (Fright Night), featuring cinematography by Ric Waite (48 Hrs). Shy misfit Sarah Goodwin (Kay Lenz, House), has a secret gift: the ability to control -- and destroy -- with her mind. When Sarah goes off to college with her more outgoing and popular sister, Patty (Morgan Brittany, Sundown: The Vampire In Retreat), their plans to join the most prestigious sorority on campus are scuttled by snobby president, Jennifer Lawrence (Morgan Fairchild, Phantom of the Mall). Separated from her sister, Sarah is taken in by a rival, less popular sorority, whose mysterious house mother, Mrs. Hunter (Shelley Winters, The Night of the Hunter), is harboring a secret of her own: a scheme to harness Sarah's terrifying power for revenge. Betrayed by Patty, humiliated by Jennifer, it can only be a matter of time before Sorority Hell Week erupts in flame! Making its Blu-Ray debut with an all-new restoration by Arrow Films from the original camera negative, The Initiation of Sarah has never looked better and comes packed with all new bonus materials.

It's CARRIE vs. sorority bitches n' witch's in this small screen supernatural thriller with a dorm-full of memorable faces

Making its Blu-Ray debut with an all-new restoration by Arrow Films from the original camera negative, The Initiation of Sarah has never looked better and comes packed with all new bonus materials.

The Initiation of Sarah is a perfect reason to once more spend the night at home.

For anyone on the fence about The Initiation of Sarah, Brian De Palma’s Carrie would be a good barometer for figuring out if this film is for you.

...the best way to experience terror was to slowly build the tension to the exhilarating crescendo. The Initiation of Sarah is a perfect example of this!

The Initiation of Sarah is a highly entertaining film that fans of 1970’s made-for-TV movies should thoroughly enjoy.

The Blu-ray comes with better than expected visuals...and a mix of bonus materials.

The 1970s were arguably the Golden Age of TV horror, with The Initiation of Sarah being one of its cult classics.

The Initiation Of Sarah is one of the best made-for-television movies we have seen yet with its strong production value and distinct sense of unease throughout.

It is all a bit silly and a whole lot camp, but there is quite a bit of charm to The Initiation of Sarah. Morgan Fairchild and Shelley Winters are clearly having fun and they make the whole film worth watching.

RECOMMENDED, especially if you like female empowerment and witchcraft films and shows.