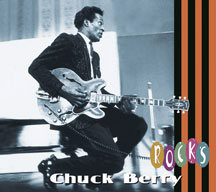 From the rockabilly flavoured Maybellene to the adrenalin rush of Dear Dad (both about automobiles!) this formidable collection spans ten years and over 20 Hot Hundred Hits. They're all here. All his greatest songs. This is a non-stop hymn to the USA; a crash course chronicle of high school hops, teen romance and rock 'n' roll cartography. Hear the most imitated electric guitar licks of all time; driving riffs which separate Chuck Berry music from the jump blues of his predecessors. 'Every guitarist I auditioned would have to play 'Johnny B. Goode'' (Ronnie Hawkins). Chuck Berry is an enigmatic man. Charming one minute and cold the next. But this hit-packed compilation is red-hot from start to finish. 'Why should I write songs Chuck Berry wrote them all' (George Thorogood).

Bear Family's 'Rocks' series finally gets to anthologise the most influential rock 'n' roll musician this side of Elvis. It was, it's been said, Chuck Berry who started it all and, in truth, his influence is incalculable and deeply felt especially by the Beatles and the Rolling Stones. As John Lennon once put it, if you wanted to give rock 'n' roll another name, you might call it 'Chuck Berry'; Jagger and Richards are said to have met when Richards clocked a Chuck Berry album under Jagger's arm.

No other songwriter has articulated the demands of the consumer society so vividly nor understood the feelings and frustrations of youth so perfectly (yet, remarkably, he was 31 when Sweet Little Sixteen was released). Chuck Berry wrote unforgettable playlets about automobile gadgetry, wayward women, classroom repression and rock 'n' roll itself. Each of these 32 tracks is a monument to his trademark guitar, the vibrant economy of his lyrics and the unifying, uplifting and enduring power of a catalogue which provided the biggest single stimulus for the '60s R&B revival, the Merseybeat explosion and the British Invasion.
Hail! Hail! Rock'n'Roll!