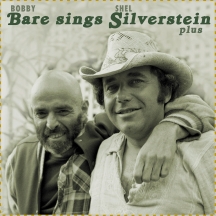 If most people associate the late Shel Silverstein with his children's literature, others remember his cartoons and graphic travelogues for 'Playboy.' By contrast, relatively few recognize this Chicago native as a prolific songwriter, penning such hits as Johnny Cash's A Boy Named Sue, Dr. Hook and the Medicine Show's The Cover Of Rolling Stone, Tompall Glaser's Another Log On The Fire, and Loretta Lynn's One's On The Waycorn.

During the late '70s, Shel Silverstein shifted his creative focus to playwriting and children's books, but he continued crafting clever songs specifically for Bare. By the mid-'80s, Bobby Bare had recorded more than 100 Silverstein originals.

'Bobby Bare Sings Shel Silverstein, Plus,' the first comprehensive collection of this material, is accompanied by a 128-page hardcover book, its eight CDs include 137 tracks, 25 of them previously unissued. Six albums appear complete, including integral songs by other writers. The long-unheard 'Great American Saturday Night' includes three songs missing from a recent independent label release.

The box set contains an LP-sized, lavishly illustrated 128-page hardcover book that contains song lyrics and a discography. In a conversation with Hank Davis, Bare recalls his years working with Silverstein, and Dave Samuelson documents the songwriter's multiple creative pursuits.

These eight CDs leave you with a new appreciation for their funky, off-color chemistry.

A proper throwback to a time when songwriting literacy and pure shit-kicking were not such strange bedfellows... Excellent.