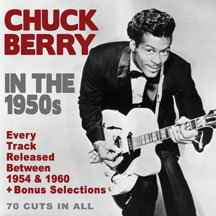 He was 29 before he made his first record and already had a string of criminal convictions behind him, but the man christened Charles Edward Anderson Berry must have been pre-destined to become the best song-writer of the Rock n' Roll era, the composer who'd create the blueprint that came to define the entire Rock idiom with tracks like 'Johnny B Goode' and 'Roll Over Beethoven', the guitarist who'd invent the licks that every half-decent player must learn at first base and the most charismatic performers of the 1950s - how else could such an unlikely candidate achieve so much? Chuck Berry still performs today of course, at the ripe old age of 85, as he has been doing for close to 60 years, but few would disagree that Chuck's finest work came between the day in 1955 that he signed a deal with Chess Records of Chicago, and his 1961 conviction and subsequent incarceration for transporting a minor over a state line. This 3 CD set features every track Chuck made or played on during this era - singles, B Sides, album tracks and rarities, to make for one of the finest collection of recorded music ever committed to tape. The set includes de-luxe 'oyster-box' packaging, inner card covers recreating original LP sleeves and 20 page booklet with extensive notes by R 'n'B and Jazz expert Charles Waring.