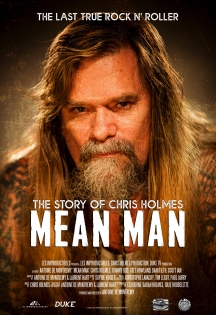 The story of an iconic guitar player who has lived a life of extreme highs and lows. After losing the publishing rights of his own songs and combatting dangerous addictions, the legendary W.A.S.P. guitarist is shown starting over from scratch while living at his mother-in-law's in Cannes, France. He is now ready to take on Europe with his new band. As we follow him along, he meets many fans and proves that he still is the showman he was as a young and famous rockstar. This musical journey draws parallel stories of the rise, fall and rebirth of Chris Holmes with archives, live performances, interviews and behind-the-scene footage

Mean Man attempts to peel back the layers of Holmes' persona, dealing with both career challenges and personal peccadilloes that have made the way treacherous for him at times... A lot of the interview segments are interesting and at times funny.

Interspersed amongst classic and current live footage are interviews with W.A.S.P. alumni Johnny Rod and Stet Howland, as well as Scott Ian (Anthrax), Dani Filth (Cradle Of Filth), Dizzy Reed (GN'R, The Dead Daisies), and Joey Vera (Armored Saint), along with friends and family members, all attesting to the fact that Chris is truly one of a kind. 8.5 out of 10