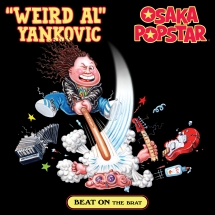 Originally appearing on the #1 charting punk-comedy crossover album "Dr. Demento Covered in Punk," the aforementioned studio version, (Produced by longtime Misfits and Ramones collaborator John Cafiero), is accompanied by two exclusive, previously unavailable LIVE bonus tracks ("Beat on the Brat" and "I Wanna Be Sedated") performed by "Weird Al" and his band on the "Ridiculously Self-Indulgent, Ill-Advised Vanity Tour".

The flip side features an all-new studio version of the title track by Osaka Popstar (a bonus cut from the newly expanded adn remastered edition of the critically acclaimed debut album "Osaka Popstar and the American Legends of Punk"), plus 3 additional Ramones covers by Osaka Popstar recorded LIVE in concert--with special guest appearances by members of the Misfits, Ramones & Black Flag--never before released on vinyl!

I selected 'Beat on the Brat' by the Ramones, because I truly believe it's the most upbeat, danceable song about child abuse ever written.

A worthy punk tribute to the original