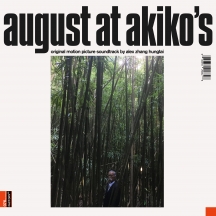 Alex Zhang Hungtai, formerly known by his stage name Dirty Beaches, is a Taiwanese-born musician who spent his formative years in Honolulu, Hawaii. As Dirty Beaches, Alex released a number of albums, including Badlands, which was subsequently nominated as a long-list nominee for the Polaris Music Prize. The composition for August at Akiko's takes his instrumental work with Dirty Beaches to more personal and experimental levels. Alex was recently featured in Showtime's "Twin Peaks: The Return." Alex also starred in "August at Akiko's," which will have its theatrical premiere in spring 2019 after a successful festival run.