Frank Zappa and The Mothers Of Invention - In The 1960s 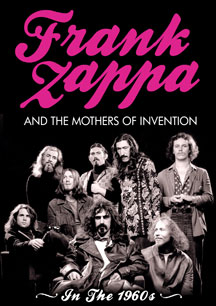 This film reviews the true story of The Mothers of Invention and the music they made during the first incarnation of the band. With group members Jimmy Carl Black, Bunk Gardner, Don Preston and Art Tripp taking up the tale and revealing - often for the first time - what the real Frank Zappa was all about; and with contributions from 'scenesters 'like LA wildman Kim Fowley, biographer Billy James, Zappa academic Ben Watson, music journalist Richie Unterberger and English writer and musician Alan Clayson - acclaimed biographer of Edgar VarÃ¨se - this program is the most detailed, informative and enjoyable documentary on Frank Zappa and The Mothers of Invention yet to emerge. Also features rare footage of Frank and The Mothers from throughout the 1960s, archive interviews, seldom seen live performances, and a host of other features.