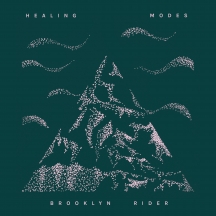 The healing properties of music have been recognized from ancient greek civilization to the field of modern neuroscience, and expressed in countless global traditions. The slow movement of Beethoven's Opus 132, 'Song of Holy Thanksgiving From a Convalescent to the Deity in the Lydian Mode' is among the most profound expressions of healing in the string quartet repertoire. Beethoven's eternal work is paired with 5 works commissioned for, and premiered by Brooklyn Rider.

This album is an absolute must-have for lovers of classical, indie-classical, contemporary-classical; string quartets, Beethoven.

Superb playing is matched only by the thought, commitment, and inspiration its members pour into projects...making the string quartet ont a relic of times long gone, but a vessel for the shape of music to come

For the past few years, Brooklyn Rider have pushed the envelope pretty much as far as a string quartet can go, and in the process they have raised the bar for other group: they transcend any preconceptions about what serious composed music is all about.

The juxtapositions are illuminating, the playing persuasive, and the timing almost impossibly serendipitous.