Due to his insistence that he has an invisible six-foot rabbit for a best friend, a man is thought to be insane 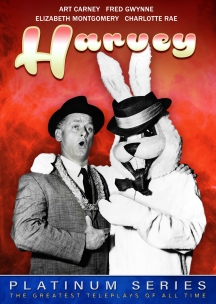 The classic stage hit gets the Hollywood treatment in the story of Elwood P. Dowd, an endlessly pleasant and delightfully eccentric bachelor living in a small town that isn't aware that its newest citizen is a invisible, 6'3" white rabbit named "Harvey" that only he sees. After his sister tries to commit him to a mental institution, Elwood and Harvey become the catalysts for the family to heal.

Even the overall quality of the production has been brought lovingly to life by Liberation Hall, especially considering the age of the show. The story line is fabulous and with this all-star cast, well, this was a true hit at my house last night; and that was with a whole new generation alongside me to watch it!

The classic stage hit Harvey gets the primetime television treatment in the story of Elwood P. Dowd, an endlessly pleasant and delightfully eccentric bachelor living in a small town that isn’t quite aware that its newest citizen is an invisible.