The Bridge Of San Luis Rey

A friar is tried by the Inquisition for questioning God's intentions when five die in the collapse of an Andean bridge. 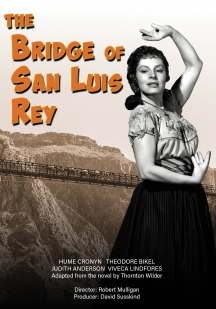 In early 18th century Peru (1714), an old Inca rope bridge over a gorge in the Andes, collapses, plunging five travelers to their deaths. Brother Juniper, who was within minutes of being on the bridge himself, becomes obsessed with discovering how five people of differing class and circumstances came to be on the bridge at that moment. The Catholic friar wants to know if it was mere existential happenstance or part of God's cosmic plan. After researching the lives of the victims for five years and publishing his findings in a book, he is accused of heresy by the worldly Archbishop of Lima and put on trial for his life by the Inquisition.

Watching it again today here on DVD, it is obvious why it was so highly praised at the time for its lush production standards and trio of overall quality, taste and acting competence.

If you are a fan of early TV, or Thornton Wilder's The Bridge of San Luis Rey this DVD is going to be one you are gonna want to add your collection

I’ve heard of the story many times but never really knew what it was about, so I found the plot (about a monk investigating a rope bridge collapse, and much more) quite interesting.