DEATH isn''t the first name in Death Metal for nothing. 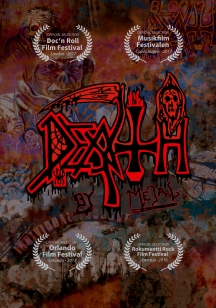 Here comes DEATH's probing and pulsing rock doc, DEATH BY METAL, pulling back the palm fronds of DEATH's origins in Altamonte Springs, Florida, and latching a narrative hook into the headstrong Chuck Schuldiner juggernaut for fifteen gratifying if sometimes frustrating years. As the baby steps become giant leaps, the stable of supporting players grows and continually shines in its own devious light. Excitement grows as Schuldiner, his band, and the world around him evolve, and the music grows ever-more outrageous and bombastic. DEATH's threat morphs from simple zombie attack to multi-headed mega-monster hellbent on absorbing entire planets. Then suddenly, Chuck is just gone, and the lights go out. The formula for movies about bands dictates that victory is seized from the jaws of mortality in the final act. This is where things get weird. Chuck Schuldiner perished during the moment of heavy metal's weakest ebb, and possibly the quietest moment of his own career. The drawling guitar demon in the kitty cat shirt will not rise again to tour county fairs, swap one-liners on late-night TV, and jam with Judas Priest at the Rock and Roll Hall of Fame. But this documentary itself joins reissues, partial reunion tours, and an international reawakening as part of a decade-long ascent for DEATH to its proper place of high dominion. As you read these words and watch this film, Chuck Schuldiner and DEATH return to glory, and the legend itself becomes an eternal encore.

The most important death metal-related documentary ever filmed

A fitting tribute to a man's passion and art (4 stars)

Mandatory viewing for all Death fans and beyond, all fans of extreme music