When Only The Music Mattered 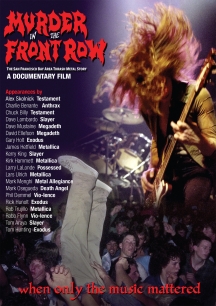 Murder In The Front Row: The San Francisco Bay Area Thrash Metal Story. In the early 1980's, a small group of dedicated Bay Area headbangers shunned the hard rock of MTV and Hollywood hairspray bands in favor of a more dangerous brand of metal that became known as thrash! From the tape trading network to the clubs to the record stores and fanzines, director Adam Dubin reveals how the scene nurtured the music and the music spawned a movement. Murder In The Front Row is told through powerful first person testimony and stunning animation and photography. The film is a social study of a group of young people defying the odds and building something essential for themselves. Featuring interviews with Metallica, Megadeth, Slayer, Anthrax, Exodus, Testament, Death Angel, Possessed and many more! Narrated by Brian Posehn.

This is a fun history of a tight-knit scene that birthed scads of followers.

The story is told thoroughly, lovingly and respectfully via revealing interviews with not only the usual suspects, but a heaping handful of those who knowingly and unknowingly played integral roles in fostering the scene via art, antics, friendship, behind-the-scenes business and simply being poser killing fans.

It's a refreshingly comprehensive look at a scene. At no point are there any glaring exceptions. So often, in documentaries such as this, there's some figure important to the history of it all that doesn't want to appear on camera, but here - it's everyone. Every member of Metallica. Dave Mustaine, for heaven's sake.

Murder In The Front Row engages the emotions rather than the intellect and gets by largely on warmth and humanity... Dubin and his impressive cast of talking heads manage to convey the delinquent energy of the scene and celebrate the often extraordinary personalities who drove it.

An introductory course to thrash metal, Murder In The Front Row serves as a comprehensive retrospective for hardcore fans, and an endearing homage to the trailblazing artists that molded the scene.