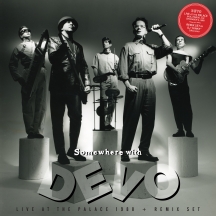 BLACK VINYL. The "Somewhere With Devo" suite was performed live, one night only, as the encore of the band's Total Devo concert at The Palace in Hollywood, CA 12/9/88. The Devo re-mix set by DJ Kinky from 2010, also included here, was never released previously. Pressing limited to 2500 copies