Night Of The Living Dead: Reanimated

Over 100 artists reanimate one timeless classic! 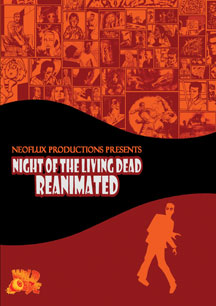 Night of the Living Dead: Reanimated is a collaborative artistic mash-up of George Romero's cult classic. Nearly 150 International artists and animators chose their favorite scenes and re-envisioned them through their own artwork, with no restrictions on style, media or process - resulting in an eclectic 'art show' interpretation of the seminal 1968 film, all placed over the original's audio. With work ranging from oil paintings to comic illustrations and sock puppets to CGI and stop-motion - NOTLD:R not only pays the respect due to this most important work in horror history, but encourages viewers to experience the film in a brand new light that bursts with the humor and horror of a new generation of artists. Art is dead...yeah, it's all messed up.

A grand love letter and appreciation of a seminal horror work.

A stunning collaborative work of art, done for and by horror fans.