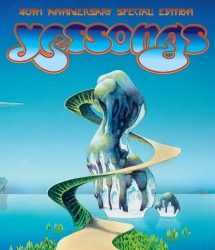 YES has always been regarded as a unique rock group and progressive rock legends. Never afraid to innovate or draw their inspiration from music that traversed the spectrum from symphonic to rock, YES has been at the forefront of progressive rock and became a major force in popular music selling over 30 million albums and reaching platinum status multiple times worldwide. During the late 1960's YES were renowned for their live performances culminating in their seminal album and film of the same name, YESSONGS. Filmed in 1972 at London's Rainbow theatre, this feature film was released theatrically in the UK the following year with a quadrophonic sound track. The film features their new line-up of the time Jon Anderson, Chris Squire, Steve Howe, Rick Wakeman and Alan White.

There's a simple pleasure in watching the five gel so happily and creatively. The music demonstrates why believers have remained so loyal.

A fascinating document of one of the most important prog rock aggregations of its era. The two major supplements, the previously 'lost' Howe short and especially the 40th anniversary documentary, are hugely enjoyable.