The legendary blues-rock innovators rock the Whisky and Carousel 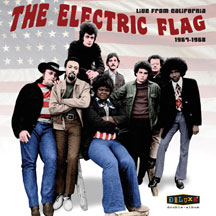 The Electric Flag was one of the premiere rock bands of the 1960's. Organized by Mike Bloomfield, who had just left the Paul Butterfield Blues Band, the band featured such notable talent as Buddy Miles, Elvin Bishop, Nick Gravenites and Barry Goldberg. The Flag was the first band to feature a full horn section in support of it's searing blues and jazz based rock originals The Electric Flag astounded both critics and the public, both of which proclaimed the band as the world's greatest. And they were, indeed! No one ever came close to their combination of brilliant musicianship and hard blues based commercial music. Sadly, egos prevailed and the group broke up after only two years of performing and recording.. Their albums are still selling today and are regarded as essential albums for any rock library. RockBeat Records is proud to add these brilliant live performances to the legacy of the Electric Flag. This album presents them as audiences of the 1960's heard them, all the excitement and brilliance are present and there's little doubt fans will want to add this final performance.

Two hours' worth of frequently stunning performances. The entire band really cooks throughout, but on virtually every number, it is Bloomfield's guitar work that steals the show.