Patty Smyth & Scandal - Goodbye To You! Best Of The '80s Live 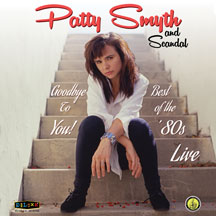 Pink Vinyl! Patty Smyth, both with her hit band Scandal and as a solo artist, is a true "New Wave Queen" and has always been, at heart, a rock and roll chick, and that's no truer today, now that she's back on the road.. If Smyth did nothing but marry New York punk poet Richard Hell (Television, Voidoids), then noted tennis punk and commentator John McEnroe, that would be amazing enough, but she's also earned both Oscar and Grammy nominations and recorded a series of hit singles and albums. Smyth was born in New York City, and had a very bohemian upbringing. Her mother managed legendary guitarist Link Wray and ran or owned several prominent Greenwich Village nightclubs, including the Gaslight, the Café Wha?. The group burst onto the scene in 1982 with a self-titled debut EP that turned out to be the best-selling EP in Columbia Records history, featuring the hit single, "Goodbye to You," a #1 MTV video. Scandal included the hits "Love's Got a Line on You" and "Win Some, Lose Some" on the group's first full-length album, "The Warrior", released in 1984, climbing into the Top 20 on the sales chart, eventually earning RIAA-certified platinum status. "The Warrior" remains popular to this day, featured on the radio station Flash FM in the video game Grand Theft Auto and in the third installment of Guitar Hero, Rocks the '80s. After Scandal broke up, Smyth's hard edged vocals caused Eddie Van Halen to invite her to join Van Halen (when she was 8 months pregnant!) but she declined. The first 3 sides were recorded at the Agora Ballroom in New Haven, Ct. on July 15, 1983 and side 4 was recorded from a date at Indiana University on October 22, 1984.

Smyth did pen one of the greatest rock kiss-offs of the '80s (or any other decade) in 'Goodbye to You.'