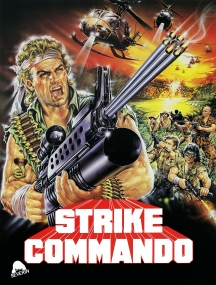 Two years before the deranged genius of ROBOWAR and SHOCKING DARK, writer/director Bruno Mattei and co-writers Claudio Fragasso & Rossella Drudi borrowed from RAMBO: FIRST BLOOD PART II, MISSING IN ACTION and more to create their own mind-blowing 'Namsploitation masterpiece: Reb Brown (UNCOMMON VALOR) stars as Sgt. Mike Ransom, a one-man war machine on a screaming-for-vengeance mission against brutal Vietcong, merciless Russians, double-crossing U.S. officers and acres of bullet-blasted Philippines jungle. Christopher Connelly (RAIDERS OF ATLANTIS), Luciano Pigozzi (ALL THE COLORS OF THE DARK) and Jim Gaines (ISLAND OF THE LIVING DEAD) co-star in this exploding bamboo gun-tower of "Mattei magic at its finest" (Good Efficient Butchery), now mastered in 2K from the original negative for the first time.

'ABSOLUTELY BATSH*T INSANE... To say that mayhem ensues would be a serious understatement. Reb F*cking Brown is a worldwide treasure.'

'SEE THIS MOVIE... A great action-filled ride that gets better with each viewing. Best 'going-apesh!t' ending to a movie ever.'

The adrenalized combat pauses occasionally for furrow-browed dialogue before culminating in a face-off between Brown and Vitale - who has outfitted himself with steel teeth - that doesn't stretch the limits of credulity as much as it shoves it down a flight of stairs.