Invaders Of The Lost Gold

THE WORLDWIDE BLU-RAY PREMIERE MASTERED FROM THE ORIGINAL NEGATIVE! 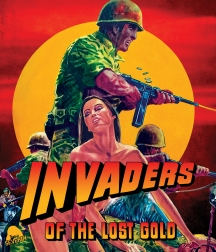 From producer Dick Randall - whose international trashterpieces include ESCAPE FROM WOMEN'S PRISON, THE WILD WILD WORLD OF JAYNE MANSFIELD and PIECES - comes perhaps the most notorious all-star Philippine productions of the '80s: In the last days of WWII, a Japanese platoon is attacked by headhunters while attempting to hide millions in gold. 36 years later, a grizzled guide (onetime Academy Award® nominee Stuart Whitman) is hired to lead an expedition - including Woody Strode (SPARTACUS), Harold 'Oddjob' Sakata and Laura 'Emanuelle' Gemser - into a jungle inferno of greed, violence, nudity and murder. Edmund Purdom (ABSURD) and Glynis Barber (DEMPSEY AND MAKEPEACE) co-star in this "delicious piece of atrocity cake" (Funxton) directed by Alan Birkenshaw (KILLER'S MOON) - also known as HORROR SAFARI - now scanned in 2K for the first time ever.

'A DESCENT INTO JUNGLE MADNESS... A good-natured adventure with a juicy exploitation cast and laced with lurid sex & gore.'

'A MISH-MASS OF CRAZINESS... It's gratuitous nudity & violence and all-star exploitation cast make for stand-out moments.'

This has all the hallmarks of a video nasty movie done right; gratuitous nudity, shocking violence, and a whole bunch of corny dialogue. In the history of cheap B-movies produced and shot in the Philippines, it occupies an intriguing place thanks to its cast. Consider this another pleasing release from Severin... If you're interested at all in Dick Randall, I'd encourage you to pick this release up.

This presentation pops rather well, offering substantial fine detail levels in at least close-ups in good lighting conditions, and the supplements will probably be interesting to those who may be considering making a purchase. Fans of the cast may want to check this out.