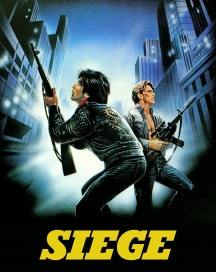 From co-directors Paul Donovan and Maura O'Connell (DEFCON-4) comes one of the most disturbing - and rarely-seen - Canadian shockers of the '80s, inspired by the actual 42-day Halifax police strike: When a local group of right-wing vigilantes massacres the patrons of a gay bar, the sole survivor seeks refuge in a nearby apartment building whose residents must now defend themselves in a night of hate, terror and bloodshed. Doug Lennox (BREAKING POINT), Tom Nardini (CAT BALLOU), Jack Blum (HAPPY BIRTHDAY TO ME) and Keith Knight (MY BLOODY VALENTINE) star in this "dark and intense thriller, still uncomfortably relevant 35 years after it was made" (Blog Of Horror) - released in the U.S. as SELF DEFENSE - scanned in 2K from the original negative recently discovered in a Nova Scotia archive.

'GRITTY AND EXPLOSIVE... This practically unknown Canadian gem remains more relevant than ever.'

'THEMATICALLY DARK AND INTENSE... An underappreciated thriller, still uncomfortably relevant 35 years after it was made.'

Siege is surprisingly effective despite some of its more cliché ridden aspects. Jason Eisener may be one of the few who thinks this is the best Canadian film ever made", but my hunch is many folks will easily think Siege is better than they expected it to be. Technical merits are generally solid, and Severin has provided two good supplements with the commentary and extended cut. Recommended.

Severin Films has done a great deed by releasing SIEGE on Blu-ray for a new audience to discover. This lean, mean, underrated exploitation gem from Canada deserves your attention.

What sounds like (and occasionally plays like) grindhouse mateial is a surprisingly tense and well-made action-drama, based in part on fact (a 1981 police strike in Nova Scotia, which kept cops off the streets for over a month) and one that rightly calls vigilantism and an unchecked police force as the horror fodder that it is.