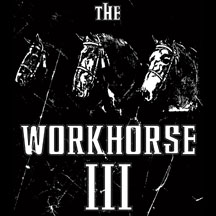 The debut CD from The Workhorse 3 is a straight to the point,kick to the groin, hook filled, 12 song affair that is refreshingly urgent and raw. An all-star power trio comprised of Philly area veterans join forces to try to save Rock and Roll ! The band's fusion of guitar driven Rock with hints of Metal, Pop, and Punk are kicked into shape with a female voiced swagger and attitude not to be taken lightly. Hailing from the streets of Philadelphia, The Workhorse 3 came together in 2008 and quickly began their assault on the area's stages. Fronted by guitarist/singer Lisa Flynn and Bassist Brian Bloemker,(aka Blunker) the pair played previously together in the band, LisaChristSuperstar. Blunker also did time in the notorious Bad Luck 13 Riot Extravaganza for as long as he could physically bear. The pair are joined by ex-Limecell/ Rancid Vat drummer Eric Perfect, who drives the songs into a ferocious storm of Rock and Roll abandon. The self titled CD is simply "All Killer and No Filler !"