Blood Soaked Tales of Horror and the Macabre. 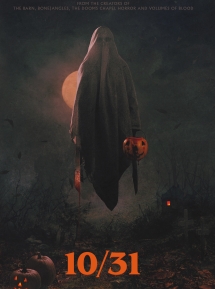 Join Malvolia: The Queen of Screams as she takes you on a journey through the chilling depths of her Halloween Monster Marathon. Featuring five indie directors with unique Halloween stories including a stay at a haunted bed & breakfast in "The Old Hag" (Justin M. Seaman of 'The Barn'), a first date gone deadly in "Trespassers" (Zane Hershberger of 'Cryptids'), a murderous roller rink party in "Killing the Dance" (John William Holt of 'The Dooms Chapel Horror), a freak October winter storm sends tricksters and even Santa to your door in "The Halloween Blizzard of '91" (Brett DeJager of 'Bonejangles'), and an escaped madman continues his seasonal killing spree in "The Samhain Slasher" (Rocky Gray's directorial debut).

The acting in this one is solid... 10/31 is a fun late night Halloween flick

I love horror anthologies and holiday centered horror flicks so I may be a bit biased but damn this was a great movie! I instantly fell in love with it!