Envious roommates in a duel to the death. 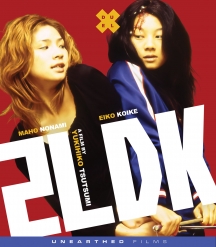 Anyone who's ever had a difficult roommate will relate to this outrageous and violent Japanese comedy. Small town girl Nozomi and her glamorous, big city roommate, Lana, share a Tokyo apartment (2 bedroom, living room, dining room, and kitchen, hence the titular abbreviation). They already have their little disagreements, but when it comes to light that they are competing for the same movie role AND the same man, their fights escalate from arguments to all-out power tool battles! Taking place entirely within the confines of the apartment, 2LDK is short, thrilling ride for fans of offbeat cinema.

You won't be disappointed!

'2LDK' is a true testament to the fact that great movies can be produced despite any circumstances.

First there was Freddy vs Jason. Then came Alien vs Predator. Now we have Lana vs Nozomi and, in some ways, this may be the most satisfying pairing of all.

2LDK emerges as the winner of The Duel Project, and is a highly creative and fun piece of nastiness that's well-worth tracking down.

'2LDK' delivers the goods for anyone interested in Asian films.

it is dripping with insight into just how warped the human soul can become.

it's a pretty wild ride and will gain an audience and a cult status...

it is the actresses and how their character's interact with each other - as well as the quirky but darkly spot on sense of humor - that make 2LDK one of the most enjoyable films I have seen in a while.

A twist-ending ties this beauty into a nice package, which is swiftly paced and plays out like a two-person stage play.

Like I said, I’ve seen it a few times and enjoyed it each round.

The supplements are very enjoyable, for those who may be considering making a purchase.

Furthermore, however brutal things might be, they're also peppered with just the right amount of black humour to save the film from utter bleakness and entertain throughout.

Darkly funny and often riveting in its sprawling craziness, 2LDK neatly captures the ultimate in seething resentment and animosity with pitch-perfect candor