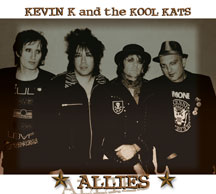 ALLIES is the 22nd CD in the Kevin K canon, a fiery mix of 11 new songs and as a bonus, the classic remastered Kevin K CD "13th Street!" All the Kevin K garage-rock arsenal you need to ration you through. "Combining Rock and Roll and World War II is what it's all about," sez Kevin, and look for him to annihilate us on ALLIES! Watch for Kevin K and the international ALLIES band on tour this year.

'Old soldiers never die, they just fade away, but Kevin K still illiminates his legions. Surrender to the forces of Kevin K! I shall return!'-Kevin K