Coming-of-age comedy about growing up, falling in love and the teenager who became the very first fan of the movie that changed everything, Star Wars. 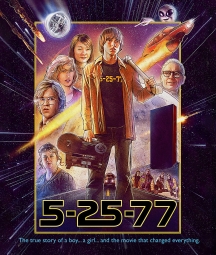 During the spring of 1977, sci-fi obsessed teenager Pat Johnson (John Francis Daley, Game Night, "Freaks and Geeks") finds himself torn between making 8mm sequels to his favorite movies and pursuing the girl of his dreams, Linda (Emmi Chen, Normal). Desperate to help her son escape his likely future in Wadsworth, Illinois, (population 750), his mother Janet (Colleen Camp, Wayne's World) cold-calls the editor of 'American Cinematographer' magazine and Pat soon finds himself on "the ultimate trip" to Hollywood, becoming the very first outsider to see the film that would change him (and movies) forever... Star Wars. But when Pat returns to his hometown existence, he struggles to choose between chasing a seemingly impossible dream and accepting the comforting familiarity of home.

'5-25-77' is his [Patrick Read Johnson's] loosely autobiographical film about the impact of 'Star Wars' on his own life as a teenage geek in love with the movies... Johnson has made one of the most loving odes to geekdom ever. It is simply fantastic.