Man Of A Thousand Faces 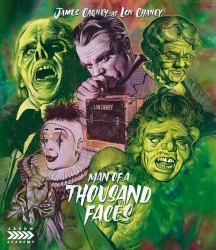 One screen legend pays homage to another in Man of a Thousand Faces, an enthralling biopic which sees Oscar-winning tough guy James Cagney give a multifaceted portrayal of silent cinema legend Lon Chaney. In early horror classics such as The Hunchback of Notre Dame and The Phantom of The Opera, Lon Chaney captivated audiences with his vivid personifications of grotesque and afflicted characters. His extraordinary make-up skills, and miraculous ability to completely transform into grisly yet sympathetic and tragic monsters, garnered him international acclaim and the famous moniker of this film's title. Yet, despite his talent and success, Chaney led a life plagued by hardship and heartache. This insightful film-portrait traces the trajectory of the actor's career: from impoverished vaudeville clown to Hollywood stardom, whilst also capturing the drama that surrounded his private life. The film is presented here for the first time in dazzling High Definition, with a selection of revealing extras.

Man of a Thousand Faces is certainly one of Pevney's better remembered films, and it is a generally well constructed and always beautifully performed piece... It's a compelling love letter to one of the titans of early cinema. Recommended.

A must-buy for Chaney obsessives and Hollywood History buffs.