Miles Davis & John Coltrane - All Of You: The Last Tour

Miles Davis' tour of Europe during the spring of 1960 marked the close of his five year association with John Coltrane. 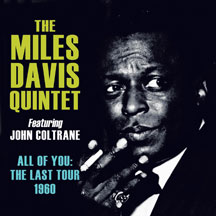 Miles Davis' tour of continental Europe during the spring of 1960 marked the close of his five year association with John Coltrane. Although the controversial saxophonist had already embarked on his own bandleading career and had been lured back to Davis'group only reluctantly, creative sparks flew the instant the band took to the stage. Night after night stunned audiences witnessed the trumpeter and his star sidemen reinventing their regular repertoire like never before. As the tour progressed through Sweden, Germany, Switzerland and Holland, several of the bands appearances were broadcast or privately recorded, with the resulting tapes soon becoming sought after collector's items. This new Acrobat release compiles various recordings made during the trip, documenting the extraordinary creative alchemy of a legendary partnership about to disintegrate. In addition, the collection features a revealing backstage interview with John Coltrane, recorded in Sweden. The release also includes an in-depth essay by saxophonist and writer Simon Spillett.

An extraordinary document of an historic collaboration of giants.

A comprehensive portrait of one of Jazz's finest ensembles functioning at the apex of its powers. 5 stars

A creative alchemy no quintet repeated.

Simply said, this set puts the 'class' in 'classic.' Music that defines jazz.

It is an attractive set, reasonably priced, and it holds a wealth of timeless music.

This four-CD boxed set captures for posterity how this quintet night after night stunned audiences in Sweden, Germany, Switzerland and Holland.

The effect and influence of the Davis and Coltrane partnership is immeasurable, and hindsight does nothing but add value to these recordings. The Quintet of 1960 expanded the scope of what was imaginable inside and outside the often protective genre walls of jazz, writing new definitions of form and content in improvisation, and creating a philosophy that endures as a touchstone today.